This is the final blog post in a series of three about The Cinder Notes album, with this last entry summarizing tracks 7-13.  Hope you all have enjoyed going behind the songs in this collection, and that it has given you a little more insight as to how I create music.

Track 7, River Finn.  Calm, easy going and with a relaxing pace this song was the first song written for the CD.  Around the time I wrote this we got a puppy – I wanted to name him “River”, my husband wanted “Finn”.  His name is “Finn”.  Since I still really liked both names together I decided to just call a song “River Finn”.  Sometimes weird simplicity is the way to go, and the title goes well with the laid-back nature of the melody.   And, the real “Finn” is a super chill dog.

The Visitor.   I’m not into writing music associated with deep, personal reasons and prefer to stick with the basics of being inspired by nature.  This song, though…  It originated from loss, followed by ongoing obvious signs of new life and peace.  I struggled to find a melody “good” enough to be worthy of the title and meaning, but this one worked with the slight key change in the second part of the song.  Simplistic and not very long in length, in the end it was perfection.

Track 9, Woodlands, brings it all right back to nature.  Initially a medium to fast paced song, I slowed this one waaaay down because I was looking for a song with more of a “coffee house” vibe for the album.  The melody worked perfect for this.  Another one I would highly recommend the sheet music on, this is my other favorite to play and is one you can really “dig” into.  Seriously love playing this one with the lights really low in the room, or completely in the dark.  It’s deep, rich and quiet all at the same time and, if played correctly, the “transition” part of the song in the middle is just… ideal for expressive piano.  Truly my favorite kind of piano music to play. 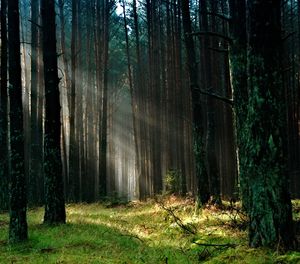 Tamaracks.   A tree with a cool name - and commonly found throughout the Northern Great Lakes Region.  I liked the way the title sounded along with the other tracks on the album.   The song moves along at a good pace, with a catchy melody, and you can almost imagine the hawks flying to and from the branches of the trees along the Lake.  Another fantastic one to play, I’d recommend the sheet music on this one, also.

Track 11, The Cinder Notes.  The title track to the album and one where I had the name of the song before writing the actual song.  I really strive for unique, original album and song titles.  I knew I wanted the word “cinder” and the word “note” somewhere on this album, and when I said the two words together I knew I had my next album title.  The song itself had to be one that you could totally get lost in if you were staring into the last burning moments of a campfire... almost hypnotic and mesmerizing.  A progressive set of notes to a quiet and strong transition, and then slowly back to the original notes to fade out.

Traveler, Track 12, brings a little bit of the beginning of the album to the end by wrapping up the story of the cedar tree and it’s traveling visitors in a rustic, unique melody that compliments the track Tobacco and Branch.   Kind of a last- minute addition to the album, it was just a song that needed to be there and fit in well.

And finally, Track 13… Wintertide.   I remember writing this one during numerous snowstorms last February after the late January “Polar Vortex” here in Wisconsin.  It was one storm, after another, after another… ridiculous for living life in, but super great if you’re a piano artist looking for inspiration J  This song has a quiet strength, just like winter.  As stated in the liner notes the representation here is cinders in a fire fading away, just like nature fades away during the Winter.  The song ends, but then returns for one last set of notes.  In my opinion it brought a beautiful, slightly haunting end to the collection of music.

Sheet music will be releasing soon for the entire album (late March/early April) – and I hope those of you who are interested in it will enjoy the music on a whole other level, rather than just listening to it.  If you play piano, you know, that there’s nothing like mastering a song knowing you’re creating that sound, whether you wrote the piece or not.  And if you don’t play piano, I hope just listening to the music I create brings you a peaceful, relaxing diversion from everyday life.