In response to the many questions I get as to what inspires me to write the music, I’ve decided to break down The Cinder Notes album song by song in more detail than the liner notes.  Here are the next set: 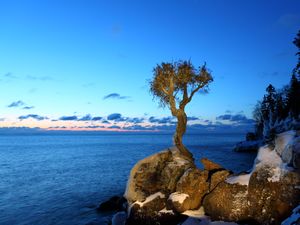 Tracks four and five are about the same location and describe the scene of a cedar tree along the northern most shore of Lake Superior’s North Shore called “Little Spirit Cedar Tree” (shown in above photo).  Another place I had never heard of, the tree is estimated to be 300-400 years old.  Located on the Grand Portage Indian Reservation just South of the Canadian border, it is considered a sacred area and access to it is restricted.  Historically, travelers have left offerings of tobacco in return for a safe journey across Lake Superior.  I first learned about the tree from a news report and, if interested, you can view that here.  The song title of Track 4, Tobacco and Branch,  fit the rustic theme, and while the song is a rather steady pace and strong, the quiet pauses intermittently reference the travelers stop along the shore to leave their offerings and then their continued travels across the treacherous waters.  It’s a song with a different, cool vibe and became a necessary part of the CD.

Track five, Spirit Cedar, represents the more spiritual, sacred aspect of the tree, and as such is a more simplistic song honoring the deep reverence locals and visitors have for the tree and its location.  Quiet and beautiful, yet with strength, it’s the perfect contrast.

Track 6, Smoke on Hawk Lake.  This song title initially was about the sea smoke on Lake Superior in the winter, and also because there are a lot of hawks in the area.  As I was writing, I realized there was a dual meaning in the song - the second of which added much more depth to the meaning of the album.  The “smoke” in the title would be as if you were sitting on the shore and saw a fire in the distance across the lake with the smoke slowly fading away into the sky from… you guessed it… cinders.  It’s a gorgeous beginning melody that goes into a deep, almost dramatic, main part of the song, and then the notes trail off at the end signifying the fire ending and the smoke fading into the sky.   This track is a huge favorite of mine, and fabulous to play.  I highly recommend the sheet music on this one - which should be releasing by early spring.

Tracks seven, eight and nine will be up next...